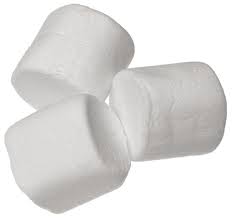 How to Pass the Marshmallow Test

You’ve probably heard of the famous “marshmallow experiment,” wherein a Stanford researcher put a marshmallow in front of a young child and said that if the child could resist eating the marshmallow for fifteen minutes, the child would receive two marshmallows.

Many of us succumb to the marshmallow in life, whether it’s eating a forbidden treat, surfing the net when we should be studying, or skipping the gym in favor of brunch.  But my own experience in changing myself through targeted behavioral shifts, or microresolutions, has taught me that those of us who have trouble resisting the marshmallow aren’t doomed to give into destructive impulses forever.

The eating habits that seemed to me to be intractable (giving into the marshmallow) improved quickly when given targeted and unrelenting focus.  One eating behavior at a time, I learned how to pass the marshmallow test.  Each of microresolutions I adopted focused my efforts a small change that demonstrated the greater rewards of exercising self-control:

I resolve not to snack while cooking dinner.  This resolution created greater appetite and appreciation for the family meal, and eliminated around 200 calories a day from my diet (you know, that little piece of French bread, that extra glass of wine)

I resolve to always leave something on my plate.  Leaving a tasty bite of something uneaten shifted the self-control battle to resisting just the last bite, rather than a plateful of seconds.

I resolve only to eat when sitting down.  This resolution kept me from mindlessly eating out of the shopping cart, while in line to pay at the cafeteria, and from noshing directly out of the refrigerator.

I resolve dine leisurely and savor my food my food and drink.  Savoring my food showed me that when it comes to eating, strolling is more satisfying than striding.

These resolutions taught me the pleasure of waiting and relishing, one behavioral change at a time, and led to a permanent weight loss of twenty pounds.  Learning to resist the marshmallow did indeed lead  to greater satisfaction and a better outcome.

The marshmallow principle applies in almost every area of self-improvement.  An evening free of sour rebukes could hinge on your forgoing the immediate gratification of saying, “I told you so” to your partner.  The first step towards mastering clutter could be hanging up your coat rather than giving into the impulse to just throw it on the chair when you come home.  Greater fitness might begin with standing one way on your commute, rather than jostling for the immediate comfort of a free seat.

Behavioral changes at the margin are the key to getting to the core of any goal.  Learning how to delay even a minor gratification helps to build a mindset that can support ambitious objectives.  It’s never to late to win the marshmallow game.

Next—How To Be More Creative Tomorrow >